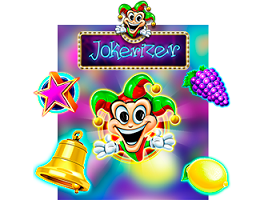 The different types of Jokerizer games

Written by David on May 1, 2016. Posted in Yggdrasil Software News.

The original Jokerizer slot became unbelievably popular among online casino players after it was released by Yggdrasil Gaming some time ago. This modern version of an old fashioned game was exactly what the community needed and that became pretty obvious considering how interested people from all over the world seemed to be.  The developer rightfully made good use of this opportunity, because the popularity of this slot indicated that players want to see more of these types of products. That is why Yggdrasil Gaming has since then released three other games that can be seen as different types of Jokerizer games. They all have the same general setup with five reels and three rows of symbols, bonus symbols with jokers and of course a special game mode where you can possibly get some huge wins. But what exactly are the differences between these different types of Jokerizer games?


As we just mentioned, this was the very first slot game from this developer that would enable you to get into the so-called Jokerizer mode. That means you will automatically get into some sort of a bonus game after getting any random win from a combination of symbols and that will enable you to continue playing with increased chances of winning. During that bonus game or special mode you will need to bet 20 coins per spin and It will keep going until you either end it yourself or until you get a mystery win. Those mystery wins are paid out in the main game when you get three or more joker symbols and in the bonus game when you get two or more joker symbols.

The second of the different types of Jokerizer games is The Dark Joker Rizes. Its design looks pretty different from the original, because the jester from the first slot has somehow become evil in the second game. But that certainly isn’t the only difference, because the bonus feature is also very different! In this version you can choose to bet either 20 or 200 coins per spin during the special mode… And the main reason why you would want to bet 200 coins per spin is because that would guarantee one extra joker symbol on the middle reel, meaning it is much easier to get a mystery win.

This slot looks a lot like the Jokerizer slot when it comes to graphics, except this one is gold plated. Do not confuse this game with the original version though, because this game has completely different features that you can make use of… Firstly, it does not have a bonus feature like with the other types of Jokerizer games. Instead, it offers a feature with sticky symbols which is more comparable with the one in the Winterberries slot. By making use of that feature you can collect joker symbols and that could then lead to a mystery win. Or even better, when you fill the game screen with jokers then you will win a jackpot which can go up to millions of euros!

The last of the different types of Jokerizer games is the Wicked Circus slot and that one does look a lot like the original version. Its graphics are somewhere in between the first game and The Dark Joker Rizes and that also pretty much goes for its features. Because with this game you can also end up in the special mode when you get a random win from a combination of symbols, except this time you will get an extra option in the navigation bar. Instead of being able to bet more coins per spin you can press a hold button at times, meaning you get the option to hold joker symbols instead of letting them give you a mystery win. That will enable you to get a bigger win than you would have gotten before, although you could of course also lose your initial win if you end up being unlucky.