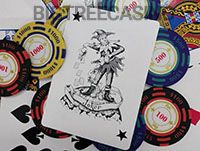 Different types of slots with jokers

Written by David on January 4, 2016. Posted in Yggdrasil Software News.

When you look at the different types of casino games that can be found on the internet then there is a good chance that you will eventually find a pattern. There are a number of patterns that tend to come around pretty often, like for example diamonds and wilds. It is more remarkable how many different slots with jokers there are, because that is oddly specific. For example, Netent has a classic slot named Mega Joker and there is also another old fashioned fruit machine called Joker 8000. The relatively new online casino software developer Yggdrasil Gaming also has a number of slots with jokers and they happen to be very high quality.
The different Yggdrasil joker slots

It just so happens that the Jokerizer slot is the first game that Yggdrasil released and it is all about the joker. His happy smile also makes for the most well-known face of this developer and the game is extremely popular among gamblers. There is also a second version of Jokerizer to be found at online casinos which goes by the name of the Dark Joker Rizes slot. That casino game is very similar to the original Jokerizer, although it is also different in a number of important ways. The joker in that game is also different, because in the second version he seems to have become evil. The original happy face from Jokerizer does return in the Joker Millions slot, which is the first progressive jackpot by Yggdrasil Gaming. In that game he wears a golden hat and instead of thousands of euros he might give hundreds of thousands of euros with a single spin! Finally there is a new casino game coming up that is also made by the same developer which is called the Joker Hold slot, but don’t tell anyone. As soon as that game is released we will give you all possible information!

Why casino slots with jokers?

So now we know that there are a lot of different online casino slots with jokers to be found at an Yggdrasil casino, but that doesn’t answer why that is the case. What exactly makes these jesters so interesting? It might be a reference to the jokers that are shown in the card game, or perhaps they are connected to gambling at a casino in some other strange way. We might never know, but most importantly we have a lot of fantastic slots with jokers that tend to pay out a lot of money!