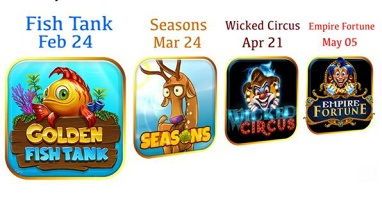 Written by David on February 13, 2016. Posted in Yggdrasil Software News.

Would you like to know which new Yggdrasil games we can expect this year? Then you have found your way to the right website, because we can tell you exactly which slots this online casino software developer is going to release in the upcoming months. Of course the upcoming releases haven’t been planned ahead for the rest of 2016, but a company like Yggdrasil Gaming does usually set a couple of dates for when they will be coming with new slots. In this news article you will get more information about the new Yggdrasil games that have already been scheduled for the months of February, March, April and May of this year.

The first of the new Yggdrasil games of 2016 has been officially scheduled for the 24th of February. It is called the Golden Fish Tank slot and if you want to know exactly how this game works then you are in luck. We have already placed an extensive game description including screenshots of the concerning slot on our website. That way you will be able to see that the Golden Fish slot has a wonderful underwater theme with all kinds of colourful symbols. Furthermore it also offers a brand new and completely unique feature called the ‘Golden Bet’. Activating this feature costs you 5 extra coins per spin, but at the same time it increases the potential of the free spins bonus game. Interesting concept, don’t you think?

Three other promising games by this developer

The online casino software developer Yggdrasil Gaming has been coming with the one gorgeous casino game after the other, so we are just going to assume that the new Yggdrasil games in 2016 are going to be just as impressive as the ones that came out before. The Seasons slot has been planned for the 24th of March and it is still a guess what the name could be referring to. Furthermore the Wicked Circus slot will be released on the 21st of April and we can play the Empire Fortune slot as of the 5th of May this year. The last two new Yggdrasil casino games seem to have jokers in their logo, so it may very well be the case that they offer similar features to the ones that we have seen before in the Jokerizer slot, the Dark Joker Rizes slot and the Joker Millions slot. We will find out soon enough!