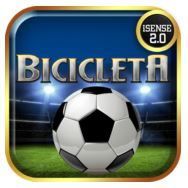 Play a new slot about football

Written by David on March 9, 2016. Posted in Yggdrasil Software News.

Are two of your favourite pastimes watching football and also gambling at an online casino? Then you are most definitely going to enjoy this new game! Yggdrasil Gaming is about to release a brand new slot that is called Bicicleta and of course this game has been created because of the upcoming European Championships for countries in 2016. This slot about football is the perfect method to get you in the mood for when the next EURO match is about to begin, or perhaps you prefer to spend half time gambling instead. It’s all up to you!


Famous features with a new theme

We have noticed that the Vikings Go Wild slot by Yggdrasil Gaming has gotten extremely popular among gamblers and of course that will have some consequences. The upcoming Bicicleta slot is going to have the exact same features as Vikings Go Wild, which means that the general setup of this slot is going to be more or less the same. But of course that doesn’t change the fact that this slot about football is going to give you a completely new kind of experience, so better prepare yourself! The term Bicicleta means the same thing as bicycle kick, a famous and daring move in the game of football… How many of those we will see during the tournament is still to be seen, but it might very well happen that you are going to be the one doing bicycles kicks after getting a big win on the Bicicleta slot by Yggdrasil!

Play a new slot about football during EURO 2016

This new casino game has been scheduled for the 9th of June and that is just in time for EURO 2016. The very first match will be taking place on the 10th of June, meaning you will get a chance to spend the entire tournament playing a slot about football at an Yggdrasil Casino while some of the best players in the world face off against each other. Speaking of EURO 2016, which country do you think will win this year? It might very well happen that the Germans go at it again, but at the same time it wouldn’t be the first time that an underdog ends up surprising the world. One thing we do know is that the Netherlands will not become European champion this time around, that’s for sure!