In the Alchymedes slot you can play with a coin value between 1 cent and 2 euro, 30 pay lines which go both ways, and a maximum bet of 60 euros per spin. The Alchymedes videoslot is good looking and pretty modern, it has a lot of colours, plus of course an impressive amount of bonus features! The only thing you could possibly hold against it is that there is simply so much to discover. Prepare for a long playing session, because it will take a while before you experience every single feature that this game has to offer!

Brew potions in the Alchymedes slot

Regardless of whether or not you like this type of casino game, you’re going to have to admit… The Alchymedes slot looks very original! The theme of this game is based on the art of alchemy which apparently takes place in a cabin in the middle of a forest. Sure, there are other Yggdrasil slots with a similar magical theme, but they really can’t be compared to this one, because the design and the quality of this slot is just so much better than what you will usually find at an online casino. During your playing session you will find bottles with magic potions on both sides of your game screen, but those have special functions which we will talk about later on. Firstly, you need to know about the fact that you can make winning combinations in a screen with no less than 20 symbols at the same time, while this can also be done from both sides! That’s right, the Alchymedes mobile slot has a so-called win both ways feature, which means that the 30 pay lines will work from both the left to the right and from the right to the left. The prizes you can win through combinations of five in a row are: the purple bottle for 500 coins; the golden bottle for 400 coins; the blue bottle for 300 coins; the green bottle for 200 coins; the spades for 100 coins; the hearts for 90 coins; the diamonds for 80 coins; and the clubs for 70 coins.

We had already mentioned that there are bottles with magic potions shown on both sides of your screen. Those both work in a completely different way and they will both work in your favour. The left one will give you so-called ‘wild patterns’, which are patterns that will put wilds in your screen in a certain way. The way these patterns are shaped is shown in the round bottle with the green liquid. The bottle on your right does something else, because that one will provide you with multipliers which are applied to the winnings from this game. As you play, this multiplier may go up and the bottom part of the bottle will show you how much the current multiplier is worth. 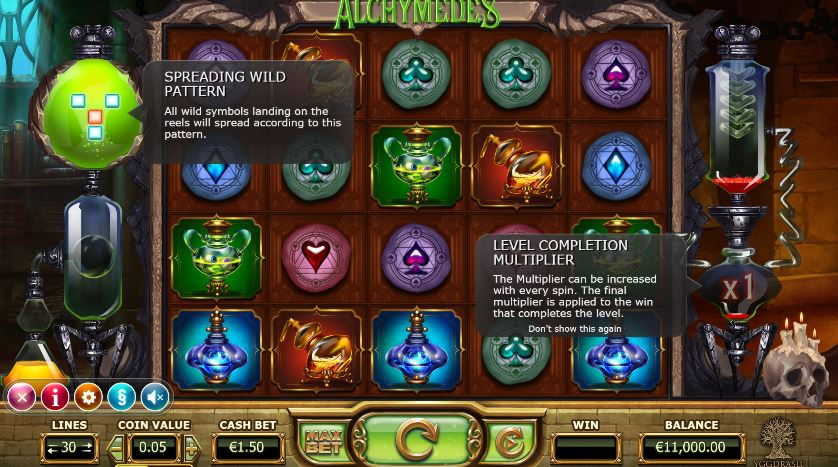 Continue to the next level

You may notice that some squares in your screen will occasionally get a yellow background while you are playing. Every position on which you make a winning combination will turn yellow and this will keep happening until all twenty squares in your screen have been coloured. But why does this happen? What’s the point? Well, apparently we are in the middle of some kind of alchemy experiment and the Alchymedes slot will turn upside down once you turn all 20 squares yellow. If you manage to do so, you will you will continue to the next level of the Alchymedes casino game, where you will see an old fashioned weighing scale. You will then get the option to choose between improved versions of the wild patterns or the multipliers. Which of these two would you go for?

So you may run into wild patterns and you may also end up multiplying your winnings. But that isn’t the only thing the Alchymedes videoslot has to offer! Every time you make it to a new level, there is a chance that you will run into a randomly triggered bonus feature. Obviously there is no guarantee that this will happen, but there’s always a chance. When this bonus feature is activated, one of the following six positive factors will be applied to your game: A win of 100 to 2000 coins; a starting multiplier of x2; a starting multiplier of x3; a faster multiplier growth; one extra pattern; or two extra patterns.