If you happen to enjoy both football and gambling then the Bicicleta slot is something you need to try. This game by Yggdrasil Gaming is a kind of a combination between the two and that will definitely provide you with a fun playing experience. The title of the game is the Spanish translation for a ‘bicycle kick’, which may be the signature move for the sport of football and you will see it a number of times while playing this slot. A fun fact is that the Bicicleta casino game was created just before the Euro 2016 championships, which makes the underlying theme extra relevant. You will probably recognise several different shirts that are worn by players in the Bicicleta slot, like for example the famous Brazilian shirt in yellow with green stripes. And while not all countries will participate in Euro 2016, it is most definitely the case that a lot of casino visitors will be interested in playing the Bicicleta videoslot that was made by Yggdrasil Gaming. You don’t actually need to be in the middle of a tournament in order to try this game though, because also next to the football theme there are a lot of interesting game properties for you to enjoy. Think for example of lots of random prizes, a free spins bonus game with stacked wilds and a unique bonus feature!

The different symbols and combinations

Regarding the fact that the Bicicleta slot is entirely focused on football you will probably expect to see some football players in it as well. The four most valuable symbols in this game happen to be players from different countries and those will give you all kinds of different winnings. For example, the player in the red shirt is the most valuable character in the Bicicleta mobile slot with 250 coins per full pay line, followed by the player with the black shirt, then the player with the yellow shirt and finally the player with the white shirt. Furthermore you can also make winning combinations in the Bicicleta slot with the well-known hearts, clubs, spades and diamonds symbols. In the Yggdrasil slots you will usually find those types of characters instead of the regular royals, so that is something else than what we are used to from other online casino software developers.

Next to the standard symbols you will also find a bunch of special symbols in the Bicicleta slot. Those are the wilds, the free spins symbols and the trophies. The wild will of course replace all standard symbols in the game, but the free spins symbols and the trophies can both activate the free spins bouns game in the Bicicleta casino game! The free spins symbols can be recognised from the picture of a football with the words ‘free spins’ underneath it. When you find 3 of these symbols in your game screen at the same time then you will automatically get 8 free spins, with 4 symbols you will get 16 free spins and with 5 symbols you will get 24 free spins. The trophy can only be found on the fifth reel of your game screen and when it shows up then it may mean two things for you in the Bicicleta slot. Firstly it is possible to get 8 tot 12 free spins, but in most cases you will get a prize which can go up to 1000 coins. The icon with the trophy can also appear during the free spins bonus game of the Bicicleta videoslot and in that case the available prizes are a bit different. At that point you will qualify for either 2 to 4 extra free spins, a prize of up to 1000 coins or a reel that is entirely filled with sticky wilds. That reel with sticky wilds can only be placed on the first, second, third or fourth column and it will stay in place until the bonus game ends. 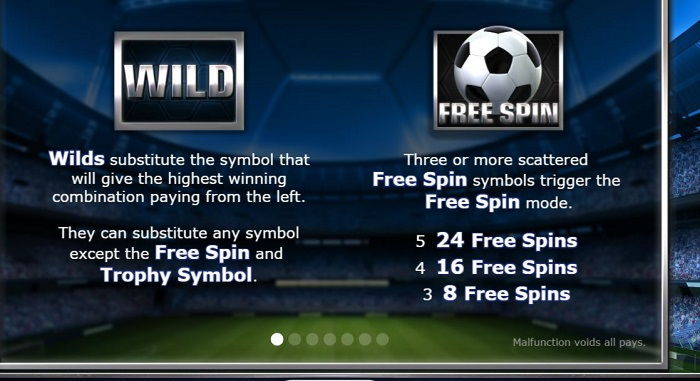 The bicycle kick feature of the free spins bonus game

So in the Bicicleta slot you can make use of wilds, a free spins bonus game and a special trophy symbol that may provide you with all kinds of winnings. With the help of the sticky wild reel you may turn an entire column of symbols into wilds… But did you know that there is another way to get sticky wilds in this game? The Bicicleta mobile slot has one extra feature that is only available during the free spins and it cannot be influenced by you as a player. On every spin you are pretty much sure to get a couple of symbols with football players in your screen and they will all try to score a beautiful goal. They will of course attempt to do this by making a bicycle kick, because we are talking about the Bicicleta slot after all, and if they score then they will stay in place as a sticky wild symbol. This idea is pretty much the same as the feature that can be found in the Vikings Go Wild slot, because in that game you will see warriors defending themselves against the monster’s tentacles. Either way, every goal that is scored with a bicycle kick in this game is very much in your favour as a player!