You can play this slot with a coin value between 1 cent and 5 euro, a fixed amount of 25 pay lines, and a maximum bet of 125 euro per spin. When you first open the Double Dragons slot by Yggdrasil Gaming, you might get the idea that it is very similar to some other titles that can be found at your favourite online casino. Of course it does have the well-known combination of features with falling symbols and multipliers that can be applied to your winnings, but the Double Dragons videoslot definitely has a lot more to offer than that as well. You can also start saving for two different types of bonus games with free spins, while there is also a chance that multiple wild reels will appear in your screen.

It is pretty hard to miss, but the Double Dragons casino game is about two different dragons who both fulfil their own purposes in this slot. That means you have two different types of wild reels and two different types of bonus symbols, but that is something we will talk about in more detail later on. First, let’s have a look at the general information, because it may seem familiar to experienced gamblers, but it has a lot more to offer than you might think. You can make combinations of symbols from the left to the right on 25 different pay lines and this can be done on a screen with three by five characters. When you manage to make a winning combination, all involved characters will simply disappear from your screen, after which the empty spaces are filled with new ones. That means you can make several winning combinations in a row, while you only need to place one bet. The available prizes for a combination of five in a row in the Double Dragons slot are as follows: The pink eye of the dragon gives 125 coins; the orange eye of the dragon gives 100 coins; the blue eye of the dragon gives 90 coins; the green eye of the dragon gives 80 coins; the pink spades gives 50 coins; red hearts give 50 coins; the blue diamonds give 40 coins; and the green clubs give 40 coins.

Fill your reels in the special feature

In the Double Dragons videoslot you will find three different meters in your screen and that may be a little bit confusing if you are playing it for the very first time. That is why it might be a good idea to quickly explain how they work. The vertical meter in the left of your screen is the one you will use the most, because every single time you make a winning combination, it will fill up with light and go up one level. As long as you make subsequent combinations, the lights will keep piling up and when four levels in a row have been activated then the bonus symbol of the Double Dragon slot will be triggered. Two enormous wild stacks are placed on the reels, which can be somewhere between 7 and 28 characters high. As a result of this feature you are almost sure to run into an impressive win, because there is a good chance that at least six wilds at the same time will find your screen in one go. In other words you should definitely try to get four successful re-spins in a row in order to fill that left-most meter with light, because that will lead to a couple of long stacks of wilds! 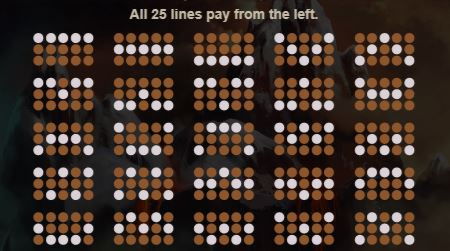 So now we have covered the left meter, but there are of course two more horizontal meters in the top of your screen as well. Those both have to do with a different dragon. The blue meter refers to the ice dragon and the orange meter refers to the fire dragon and if you want to fill them up then you will have to fulfil one simple task. Every time that you find the head of either a blue or an orange dragon, the referring meter will go up with one square! By the way, those dragon heads will also function as wilds plus one extra function. A blue ice dragon will double your win, while the orange dragon will convert two or three random characters into extra wilds. And once you find ten of those ice dragons or ten of those fire dragons then the accompanying bonus game is immediately activated with 5 free spins. Just to be clear, you can get either ‘ice free spins’ or ‘fire free spins’ by filling one of those two meters. During the free spins you only need to get two dropdowns (being successful re-spins) in order to activate the Double Dragon bonus. The dragons that will come up as a result of that function are according to the type of bonus game that you were playing, meaning either blue or orange.