The Nitro Circus slot by Yggdrasil Gaming can give you a lot of entertainment. Of course, that can be said of pretty much any online casino game, but that’s not what we mean. Because this game is extra entertaining, as it will place you in the middle of an actual circus! It’s just that this isn’t a regular circus… You won’t find any clowns of coloured lights, as you would in the Jokerizer slot, for example. Instead of that, you will end up in an enormous stadium with huge spotlights, ramps and fearless stuntmen who will fly from the one side of your screen to the other!

As soon as you open this casino game, you will see plenty of these stuntmen perform crazy aerial tricks. Some of them will fly by while on a motorcycle, a kart or a bicycle. Others may opt for a rocking horse, a bathtub on wheels or a lazy boy chair. And that will make things even more interesting then they already were! This crazy bunch of daredevils are also the main characters of this video slot, which you will find out soon enough. Because they are directly involved with all of the bonus features and most of the available symbols.

The general setup of the Nitro Circus slot

At this point we know what the game is based on. But we also need to understand how it works. Let’s start at the beginning: The game screen is made up of five reels and five rows. This means that there are twenty-five symbols visible at all times. With these symbols, you can make winning combinations from the left to the right. This is possible on 25 predetermined pay lines. The most valuable regular symbols in this game are the four different stuntmen, followed by the three different helmets.

There really isn’t much more to say about the general setup of this video slot. But that’s perfectly fine, because we definitely have a lot more to tell you when it comes to the bonus features! In addition to the regular stuff, there is also a Nitro Jump Bonus Game, a free spins function named the Nitro Free Spins and there is a Nitro Blast bonus feature. And then there are of course also wild symbols to be found on the reels which can replace all regular symbols in the game. That will make it a lot easier to make winning combinations. 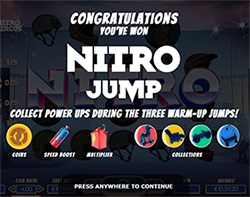 First of all, you can activate the bonus game of the Nitro Circus slot by Yggdrasil by shaping the word ‘NITRO’ in your game screen. This can be done by getting all five letters of this word on the reels, which is possible by getting the right symbols at the right time. Did the word ‘NITRO’ appear on your reels? Then it is time to become a real stuntman or stuntwoman! Like a real professional, you will start off with a good warmup. During this warmup you can collect multiple items and this can be done in three different rounds. For starters, you can collect coins.

Secondly, you can also find a ‘speed boost’, which will increase your chances of getting higher multipliers on your last jump. And thirdly, you can find multipliers which will be applied to your winnings. Once you enter the arena, it is up to you to decide your vehicle. There will be plenty to choose from, but keep in mind that every vehicle will have pros and cons, as their statistics may influence the results of your bonus game: The ‘tricks’ factor will give you bigger prizes, while ‘boost’ increases the multipliers, and ‘size’ will provide you with more items on the way. Whatever you choose, it will be up to you to put up a good show. But luckily, you will get plenty of ‘speed boost’ to do so and you can also push the Red Nitro Blast Boost Button to go even faster!

The free spins and the Nitro Blast feature

Did you not get the right letters in your screen, but you are finding bombs? Then you may qualify for another bonus feature which can be just as fun! Three or more of those nitro bombs will give you access to the free spins: 3 bombs means 10 free spins, 4 bombs means 20 free spins and 5 bombs means 30 free spins. That bonus feature will work as you may expect, except for the extra function that may also work in your favour.