This game has a coin value which can be set between 1 cent and 5 euros, while there is a fixed amount of 20 pay lines. The maximum bet that you can play with is 100 euros per spin. The Super Heroes slot is a little bit different from what you may be used to with videoslots on the internet, but that isn’t entirely surprising when you consider the fact that it was developed by Yggdrasil Gaming. In addition to the fun and impressive animations, you will constantly run into a bunch of special characters that will come running and flying into your screen, after which they will provide you with a unique bonus feature. That will give you the chance to win some impressive prizes through free spins, multipliers, wilds and even wild reels!

It is pretty obvious when you look at the name of the Super Heroes slot, but of course this game is all about fighting crime. You will first get a glimpse at the theme of this game during the video introduction, which will give you the idea that you are watching a movie that was made by a world famous studio, even though you are about to try your luck on a modern videoslot. Regarding the flashy animations and the very original game features you will be enjoying a very different set up than for example what the Jokerizer slot has to offer and that is true in many different ways. This online casino game offers a bunch of different features (and characters) which may help you in the fight for big prizes! The prizes that can be won by making a combination of five in a row (without the help of additional features) are as follows: the orange bad guy with sharp teeth and big horns will give you 500 coins; the purple bad guy with the blue light on his forehead gives 400 coins; the green bad guy with the pointy helmet will give you 300 coins; the blue bad guy with the helmet that looks like a skull will give you 250 coins; the red hearts symbol is worth 120 coins; the purple clubs are worth 100 coins; the green spades are worth 90 coins; and the blue diamonds are worth 80 coins.

Characters with and without free spins

Like with pretty much every other videoslot you will need to make winning combinations with existing symbols in order to qualify for a prize in the Super Heroes slot. But the list of prizes that we just mentioned seems to give us the idea that we will only be playing with bad guys… So where are the main characters or the Super Heroes casino game? Those will run or fly into your screen at complete random and they will then show their unique skills, through which they will influence the pay out of the game in a very positive way for the player. This can happen in four different levels with a minimum of 1 and a maximum of 4. The features characters of the Super Heroes videoslot can appear at any given time during the base game and when this happens then one will appear from the left and another will appear from the right. But during the free spins, a lot more is possible. You can get ‘free spins’ characters on all of the five reels at the same time and if you manage to get three of them on random positions then you will immediately qualify for 4 free spins. Four symbols will give you 5 free spins and five symbols will give you 7 free spins. Those numbers are of course not very impressive when you first look at them, but hold up… During the bonus game you will find a super hero running into your screen during every single spin! That changes things, doesn’t it? So, would you like to know what their different powers are? 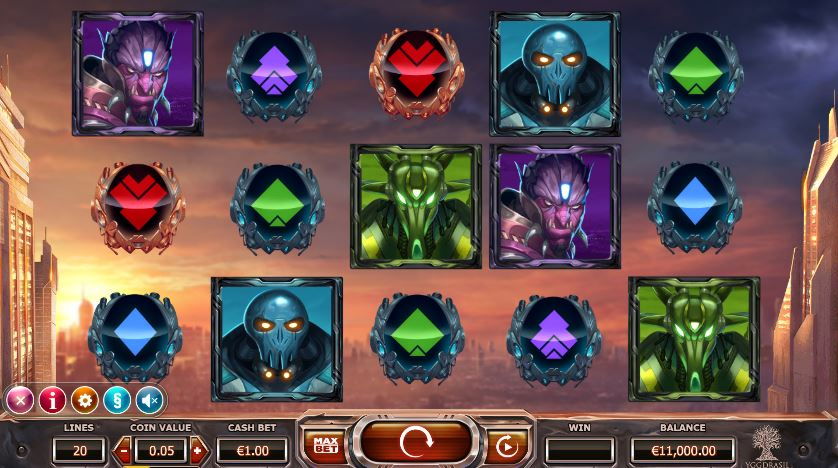