The rumours about trolls have been around for years. It originally started in Scandinavia. The stories went that big and scary human-like creatures roamed around the forests. They names them trolls. But this fantasy is no longer limited to Northern Europe. These days, you can find this phenomenon in books, movies, series and computer games. Plus of course video slots at online casinos! One such example is the Trolls Bridge slot by Yggdrasil Gaming. This developer managed to show these creatures in a remarkably funny way, while the game itself will also provide you with a wonderful gaming experience.

The setup of the Trolls Bridge slot

The general setup of the casino game can be compared to many other products that are made by Yggdrasil Gaming. It has five reels and three rows of symbols, which means that the game screen has a familiar size. You can use it to make winning combinations from the left to the right on twenty different pay lines. This combination of properties doesn’t make the Trolls Bridge slot particularly interesting, but you might want to have another look. Because there are plenty of other fun game functions that you can make use of. And those will enable you to win up to ten thousand coins as the result of a single spin, which also says a lot about your chances of winning!

Speaking of odds, the pay out percentage of the Trolls Bridge casino game is pretty impressive. The so-called return to player (RTP) of this game has been determined at 96.3% which is higher than most casino games that are being released right now. Furthermore, it is possible for all types of players to experience this videoslot. The minimum bet is only twenty eurocents per spin, while you can increase this amount to a maximum of two hundred euros. You can do so by adjusting the coin value in the bottom of your screen between 0.01 and 10.

The theme of this casino game 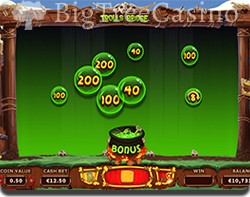 As mentioned before, this slot is about trolls. Except in this case they aren’t particularly scary. The characters that you will find in your game screen are more cartoonish, which means that the slot uses more of a comedic approach. There are four different trolls who can be found in the shape of symbols. They are orange, purple, green and blue and they seem a little bit clumsy. Because every time you make a winning combination with one of these trolls, they manage to hurt themselves with the weapons that they are holding in their hands! 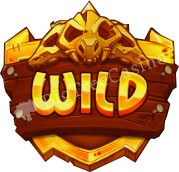 There are more symbols to be found in the Trolls Bridge slot, by the way. You will also run into hearts, clubs, spades and diamonds, plus a number of special symbols. This of course includes the bonus symbols, which we will talk about more below. And there are also four types of wilds. A wild symbol will of course replace all regular characters in the game, which will increase your chances of winnings. But that is just the regular wild. There are also three other types of wilds, which you will only find in the bonus game.

The bonus game with free spins

Win more with pots and stones

So, you can win free spins by finding bonus symbols, but that isn’t the only way. There are also two other types of symbols which may end up in your screen. The first one is called the Bonus Pot and it will only appear on the fifth reel of your screen. When that happens, you will qualify for 6 free spins with 3 bonus features, 8 free spins with 4 bonus features, 10 free spin with 5 bonus features, 1000 coins, 500 coins, 200 coins, 100 coins or 40 coins. The second one is the Bonus Stone and that one is only available in the base game. When that one drops during a winning spin, your prize will be multiplied by 2, 3, 4 or even 5. And if you didn’t win anything during that spin then you will receive a 40, 100, 200, 500, or 1000-coin prize.

Use the Golden Bet function

There is a way to increase your winnings on the Trolls Bridge slot, by the way. You can try your luck and use the Golden Bet function. This will make you increase you bet by 5 coins per spin. Don´t worry though, you will get plenty in return! If you end up in the bonus game while this function is active then you will get to choose an additional bonus feature for the free spins!