Valley of the Gods slot

As soon as you open the Valley of the Gods slot, you will be taken back in time. Back to a time when Egypt was a mysterious country full of riches, pharaohs, and awesome gods. The introduction clip of this game is very impressive, and partially thanks to a fitting background music you will think that you have entered a completely different world. Regardless what your opinion is of the Valley of the Gods videoslot, you can’t possibly deny that it looks downright amazing!

Enter the Valley of the Gods slot

The Valley of the Gods slot is definitely not the first, but also not the last, game with an ancient Egyptian theme. For some reason, modern man is completely obsessed with this point in time, and we just can’t get enough of this era. But Yggdrasil Gaming did a wonderful job with this game yet again. The Valley of the Gods mobile slot will give you the opportunity to slip away from reality for a little while, and to enter a unique and fictional world. After the introduction clip, you will see a temple with statues of two very important Egyptian gods. On the left you will see Anubis, who was known as the god of death. And on the right side you will find Horus, who was also known as the protector and the ruler of Egypt. People back then also used to think that the pharaoh was a ‘living Horus’ Instead of pay lines, the Valley of the Gods slot has an unbelievable 3125 ways to win. A way to win will come to exist when you find at least three identical symbols on subsequent reels from the left to the right. The game has six low hieroglyph symbols and four high god symbols.

Play with lives and multipliers

The real riches of the mysterious Valley of the Gods slot will be released when you destroy all 12 blockades. Because after that, you can activate two yggdrasil bonus features. After 12 destroyed blockades you will receive 1 extra life, and a multiplier of 2x will come into effect. Extra lives are used when you don’t win anything as the result of a spin. Normally the previously destroyed blockades would return in your screen, but if you have an extra life you will get another re-spin on the house. After all blockades have been destroyed you can try to collect red scarabs (extra lives) and blue scarabs. These scarabs are activated when you make winning combinations with symbols in a certain colour. Red, orange, purple and pink symbols will activate red scarabs, which are collected on the right side of your screen by Horis, and which will lead to extra lives. Blue, purple and green scarabs are sent to Anubis on the left side of your screen, which will increase your multiplier. Five red scarabs is worth one life and five blue scarabs are worth one multiplier level. The combination of free re-spins and extra lives may provide you with lots of winnings as the result of one single bet… Combine that with multipliers and 3125 ways to win, and you can imagine that the Valley of the Gods videoslot by Yggdrasil Gaming can lead to some pretty impressive winnings. Will you find those hidden treasures? 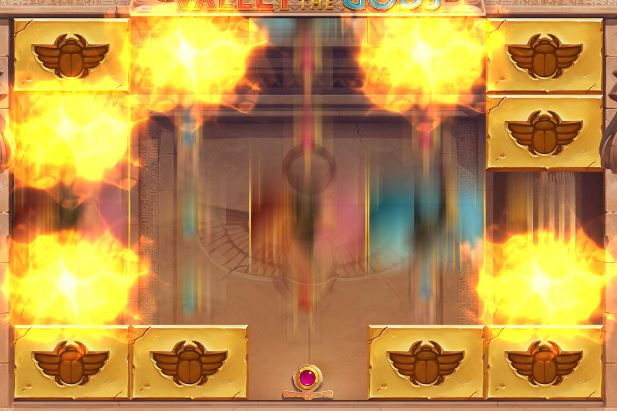