The Vikings Go Berzerk slot by Yggdrasil Gaming offers coin value options between 1 cent and 5 euros, 25 pay lines that go from the left to the right, and a maximum bet of 125 euros per spin. As the name will tell you, the Vikings Go Berzerk videoslot is a new version of the Vikings Go Wild slot that was made by the same developer. This game is a bit different, however, and because of that it becomes a lot more interesting as well. If you enjoy playing casino games with good looking features and beautiful animations then this is the videoslot for you, because there are very few games that are on the same level as this one!

As soon as you start the game, you will first see a short introduction video. This will provide you with some gorgeous animations, where the Northern warriors from the earlier slot can be found yet again. In this case they are turned to stone for some reason, while they are surrounded by mermaids. But these aren’t regular mermaids… These are so-called sirens, being dangerous mythical creatures who try to seduce sailors, after which they will try to kill them! These sirens happen to be the characters who you will be fighting in the Vikings Go Berzerk mobile slot with an army of Nordic warriors by making winning combinations from the left to the right. Make sure to keep playing until you activate the available features, because those are the moments when you will actually get the chance to do some damage. First and foremost, these are the combinations you can make on the 25 different pay lines of your game screen. The amounts of coins that are shown will be paid out when you make a combination of five in a row: The warrior with the brown beard on a red background gives 250 coins; the bald warrior with the eye patch on a purple background gives 200 coins; the warrior with the white beard and the skull on a green background gives 175 coins; the female warrior with blue paint on her face gives 150 coins; the golden coin is worth 70 coins; the silver coin is worth 60 coins; the bronze coin is worth 50 coins; and the nickel coin is worth 40 coins.

You may expect wilds and scatter symbols when you start up the Vikings Go Berzerk slot, because it is a modern videoslot after all. And they are available, except you will find the scatters in the shape of ‘free spins symbols’ which look like images of sirens with the background of an open sea. In addition to those you will also see ‘free spins’ written in the bottom of the symbol, so it is pretty easy to recognise them. If you manage to get either three, four or five of these characters on random positions of your screen during the same spin then you will automatically qualify for respectively 7, 14 or 21 free spins. Those are activated at the same time as one of the five available bonus features, being (1) Ragnarok free spins, where all warriors will go berzerk; (2) starting wild, where you will immediately get one sticky wild in your screen; (3) wild reel, which will turn one of the reels into wilds; (4) one to three extra free spins; or (5) extra treasure chests and golden treasure chests on the reels. During this feature, the warriors will go to battle with the sirens. Every time they appear on the reels they will charge into combat with one of those evil mermaids and if they manage to win then they will turn into sticky wilds. So they are using the same principle that we have seen in the earlier version of this game, except they are fighting sirens instead of a giant sea monster. 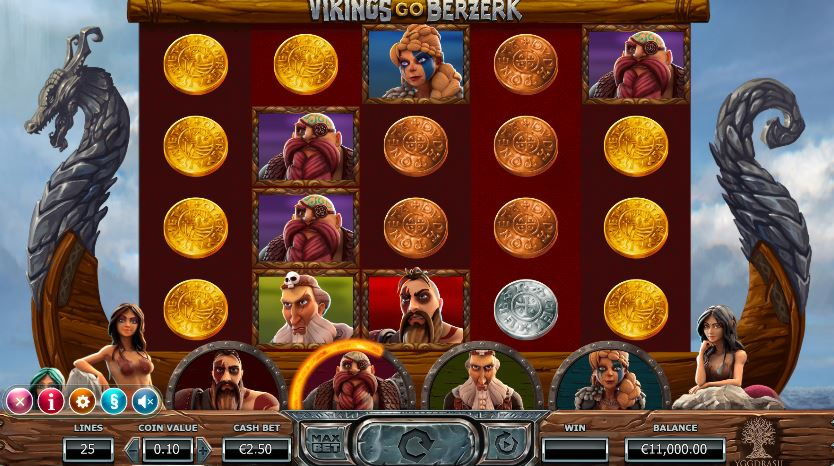 Anger the warriors for extra spins

With those free spin symbols you can make it to the free spins bonus game, but that isn’t the only way to play for free in the Vikings Go Berzerk slot. By making winning combinations in your game screen of four by five symbols you can also anger the warriors in your army. Every time you make a winning combination, a certain warrior’s rage meter will go up, until the point where he can no longer control himself. At that point you will get seven extra spins, during which the Viking has gone berzerk. That simply means that the concerning warrior will always win the fight with the sirens, meaning he will turn into a sticky wild whenever he appears on your screen.