After the success of Vikings go Wild and Vikings go Berzerk, Yggdrasil now introduces the third slot in this epic trilogy: Vikings go to Hell. Once again the slot features four brave warriors that we’ve grown to know and love. This time, they look even fiercer, and are more determent than ever to not go home before they’ve discovered the treasures that lie before them. To uncover the treasure, they have traveled to a place no man had dared to go before. The Vikings will take up arms against evil demons and fight them at the gates of hell. Will they succeed once again, or go home empty handed?

Vikings go to Hell is a five reel, 4 row videoslot with a total of 25 fixed paylines. Winning combinations are made by landing 3 or more of the same symbols on one of the paylines. The slot consists of four low weapon symbols, and four high Viking symbols. The weapons all belong to a specific Viking. The lowest weapon symbols are the bow and arrow and the double ax symbol, which both  award between 5 and 50 coins. The other two weapon symbols, the hammer and the sword symbol, award between 5 and 60 coins.

None of the Viking symbols have exactly the same value, however both the female blue Viking and the older green Viking awards up to 100 coins. The purple Viking with the eye-patch has a value between 25 and 125 coins. The highest paying Viking is the red Viking which will award 30 coins in a combination of 3 symbols, and 150 coins in a combination of 5 symbols. Besides the regular win symbols, the slot also offers a Wild symbol which can replace all other symbols except for the Free Spin symbol.

In Vikings go to Hell, our favourite warriors will engage in multiple exiting fights. One of these battles can only happen during the base game. When you hit 2 Free Spins symbols, a demon will be summoned to the reels. The Vikings will fight the evil creature, and if they succeed will award extra Rage points and Wild symbols. You will also receive a re-spin, during which all Wild symbols stick to the reels.

If you’re every bit a Yggdrasil lover as us, you’ll know that the Berzerk mode is not a new feature. This was introduced in the last Viking game:  Vikings go Berzerk. When a Viking goes Berzerk, they basically go crazy of anger and become invincible for a while. To get to this point, you have to collect Rage points throughout the game. You can track the process by taking a look at the rage meters at the left of the screen. It will show exactly how many points you’ve collected per Viking. 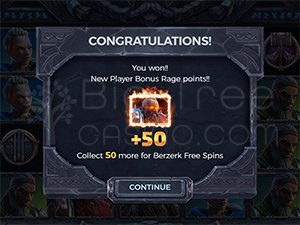 Every player receives 50 Rage points for the first Viking when opening the games. More Rage points can be collected by defeating Demons and opening treasure chests. Even better, rage points will carry on between playing session, so you don’t have to start over every time you re-start the game. If you collect 95 points for the first Viking today, you will only have to collect 5 more in your next session to completely fill his rage meter. Once the Rage meter of a Viking is filled with 100 points, 7 free spins will be activated with that particular Viking in Berzerk Mode. When a Viking is in this mode, he or she will always win a fight against a Demon.

To clarify – these free spins are exactly the same as the regular level 1 free spins (we’ll explain more about this later), with the exception that the Viking will be in Berzerk Mode and will always win a fight against a demon. This means your chances to destroy the boss, and to continue to level 2, will increase significantly.

Another bonus in Vikings go to Hell that you’ll surely appreciate is the treasure chest symbol. This special symbol can only land on the 5th reel, and will award 1 Stone Tablet. There are two stone tablets. A GOOD tablet – which is silver and displayed a Viking, and an EPIC tablet, which is demonic and awards higher prices. During the base game, these tablets can activate between 7-16 free spins, give you a coin win of 150-1200 coins or add a Rage boost to one or multiple Vikings.

If you think the demon in the base game is intimidating – you have seen nothing yet. During the Free Spins the Vikings stand face to face with two demon Bosses, the Lord of Chains and the boss of all evil: Lucifir. When you land 3 or more Free Spin symbols in the base game, you will receive 7, 12 or 16 free spins depending on the amount of Free Spins symbols. You will first enter level 1, in which the Vikings try to defeat the Lord of Chains. The goal is to destroy all three health bars of the demon boss, which are displayed above the reels.

When the Vikings defeat the boss, you will receive 2 random Wilds and proceed to the even more dangerous 2nd Free Spins level. The 2nd level always starts with 7 free spins. The Vikings fight against Lucifir, and again have to destroy 3 health bars to claim victory. After each destroyed health bar you will receive 1 random Wild symbol. Should the Vikings manage to destroy this great demon, you’re in for a royal treat. All Viking symbols will automatically turn into Wilds, which are always sticky during the free spins. Furthermore, your entire win collected from all the free spins will be multiplied by 3!